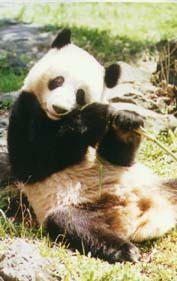 The Giant Panda is only found in China. It is also an endangered species.   For exhibition, reproduction and research, 240  Giant Pandas were captured from the wild, but at present time only about 100 still survive in zoos and natural breeding centers. Shanghai Zoological Park began to raise Giant Pandas in 1957. Up to 1994, 15 babies were born, but no baby survived. From 1990, they  cooperated with Chongqing Zoo on the Giant Panda's reproduction, by the way of offering a male Giant Panda, Chuanchuan. Up to 1995, three babies were born. Two belong to the Chongqing Zoo and one belongs to  the Shanghai Zoo. They named him Cong Cong. 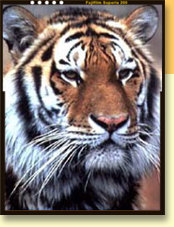 The Shanghai Zoological Park had begun to raise the South China Tiger since 1959. Up to now, more than 100  young tigers have been born and more than 60 have survived since the first successful reproduction in1968. With the development of  raising the animals' level and the success of artificial fostering, the survival rate can reach 90%. Now they have succeeded in breeding the fifth generation of the South China Tiger. At present time, there are about 50 South China Tigers in Chinese zoos under the supervision of the Chinese Association of Zoological Gardens, which has drawn up a five-year program to improve its management and to increase its reproduction. They  wish to do their best to protect the endangered species with the help of foreign dollars. 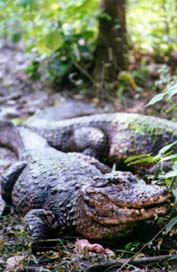 The Chinese Alligator is an endemic species of China. It is hard to reproduce under human conditions. In order to solve the problems of its breeding, Scientific technological staff dug a pond, planted trees around the pond and constructed an island in the middle of the pond imitating the conditions in the wild. Under the care of animal keepers and the hard work of technological staffs, it laid its first brood in 1980. At present time, the alligator population lives in this comfortable environment with its brood. The population is increasingly strengthening.

The Takin is an endemic animal of China. It is one of the rarest and  most endangered animals in the world. The Shanghai Zoological Park began to raise the Golden Takin in the 70s' and succeded in breeding the first young Takin in 1983.
By the hard work of keepers and technological staff, they gradually solved many problems so to ensure survival and birth. At present time, the Takin population is increasing year after year, which makes the  zoo become the Takins breeding base of the country.

The Golden Lion Tamarin, distributed in Brazil is a colorful, rare and endangered primate in the world. By the recommendation of Rotterdam Zoo, Antwerpen Zoo presented 10    Golden Lion Tamarins to the Shanghai Zoolobical Park, which made the zoo become the first zoo to exhibit the Golden Lion Tamarin in China. Two babies were born in may of 1995. To ensure them living comfortable, animal keepers and technological staff constructed an excellent environment in the No.3 Primate Building, including dune, wood, spider webs and nesting cages.

To visit more animals go to:

Pictures of the Animals of China and Asia